Getting to zero: La Crosse Collaboration to End Homelessness

Homelessness resides in the heart of FSPA ministry.
Collaboration is vital to the mission of the community. So when Erin Healy, a consultant specializing in “building strong collaborations focused on solving complex social problems” brought Establishing a La Crosse Collaborative to End Homelessness to town, FSPA met her with boots on the ground. 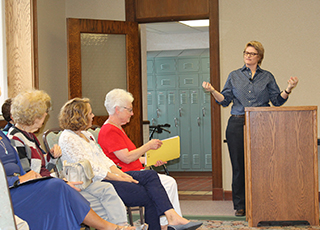 Campaign
“Getting to zero,” as Erin says, is a radical responsibility for any community to undertake, but she’s experienced it through her work with the 100,000 Homes Campaign. From 2010 to 2014, 186 communities (including New Orleans and Philadelphia) helped 105,580 of the nation’s most vulnerable homeless individuals (including 31,171 veterans) move into permanent—not crisis or temporary—housing.

Every single person given a home helps to underscore the well-proven approach called Housing First: place individuals with the highest needs (like medical/mental health conditions, substance abuse) into permanent, low-income housing and provide support services. Develop an early warning system for prevention and, in the event of recidivism, provide rapid rehousing (within 30 days) for those with moderate needs. It’s a model that, in cities like Chicago (cites Erin), tore off expensive crisis-system bandages applied to the homeless on a daily basis ($61.99 for incarceration, $22 for temporary shelter, $1,201 for hospitalization) and replaced them with a $20.55 remedy of supportive housing per day.

What outcome can that prescription provide locally? Based on data derived for La Crosse, Erin found the annual cost of one emergency shelter bed (around $14,000) is equivalent to the annual cost of rent for two one-bedroom apartments: “cheaper than a crisis system,” priceless for “helping people get their lives back on track.” Given that resource savings, the successes of other communities and the scale of the issue Erin, in confidence, issued a challenge to La Crosse: “pursue ambitious, time-bound goals” that provide the possibility of “ending homelessness for veterans and/or those chronically homeless by the end of the year.” It’s an “audacious” undertaking but, says Erin, “If you don’t have a pit in your stomach it’s not daring enough.” 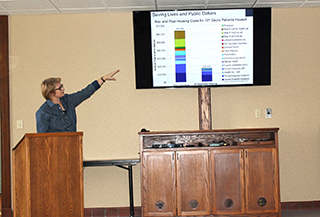 Collaboration
Such conviction will take focus, innovation and a sense of urgency but most intrinsically, collaboration—“the only way to solve homelessness.” La Crosse, Erin found, is poised to substantiate that infrastructure. “The people I met with are primed to try something new. A common question surfaced: ‘OK, what’s next? When do we start?’” Those at the table included city and county government agencies, veterans’ affairs, local law enforcement, social services and housing authority representatives; FSPA, Catholic Charities, Couleecap, New Horizons and The Salvation Army met with Erin as well.

“Many complicated social problems are caused by organizations working separately; if you don’t work in harmony the same issues keep popping up,” stresses Erin. Tasks as tall as constructing systematic access to mental health and substance/domestic abuse intervention and treatment are critical—factors that “contribute to homelessness in La Crosse at an extremely high rate.” Yet, maintaining statistics as simple as a list of those homeless by name (compiled by modes such as La Crosse’s point-in-time surveys) can streamline the system. It’s essential, however, that all supporters shift away from the short-term mentality of temporary housing—a common objective that “with the expertise and incredible provider community” is already within reach.

Conviction
Says Erin, given “the scale of the issue, the size of La Crosse (fewer layers, less moving parts) and the number of champions I’ve found here, I have no doubt reaching functional zero [eradication] for some homeless populations is possible by the end of 2016.” In continual good faith “there is no reason La Crosse cannot achieve functional zero in the future.”

And “for their place ... legacy ... and influence in the community,” declares Erin, “ FSPA holds a very powerful leadership position hugely advantageous for this initiative.” La Crosse “is unique, as the sisters are really at the forefront of the call to action. FSPA could be creating a model for other communities and congregations.”

Sandra Brekke, director of St. Clare Health Mission and coordinator of Gundersen Health System’s Population Health (a program designed to address community concerns like alcohol and tobacco use, obesity and diversity), initiated the invitation to Erin. And Sandy agrees with Erin. “The leadership of FSPA has inspired the community to do what is right and just for those individuals who need us the most. They have shown the community by example how to unite for issues of social justice.” 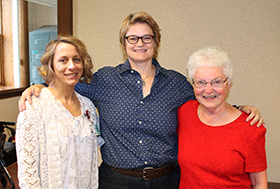 Compassion
While many of Erin’s recommendations are data-driven, she imparts that “With empathy, compassion and individualism at the heart of service, La Crosse humanizes those homeless.” It’s “a very basic, human response to give a person a meal, a place to be. The sisters are doing that, and recognize the need to solve this problem for the long term.” Such commitment, imparts Erin, “is very inspiring to me.”

Sister Karen Neuser, one of the leaders of the Homelessness Initiative that brought the La Crosse Warming Center and Franciscan Hospitality House into being and a prominent presence throughout Erin’s weeklong campaign, mirrors such sentiments. “Erin’s vision and experience are providing the catalyst we need to create and implement a new, collaborative, sustainable initiative focused on ending homelessness in La Crosse. She has inspired hope and enthusiasm,” says Sister Karen, “as we confidently move forward to achieve this aggressive, gut-wrenching, goal.”