The FSPA family has grown by four—four new affiliates independently, yet in unity, fulfilling Franciscan spirituality in La Crosse, Wis., Duluth, Minn., and Las Vegas, Nev. We welcome them and celebrate their reflections. 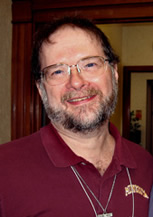 “ ... their active engagement with affiliates as true partners, not simply helpmates:” it’s the authentic ministerial relationship Bob Barnes, new covenant affiliate from Duluth, Minn., has been seeking with FSPA.

He was first introduced to FSPA as a member of the operating board for Marywood Franciscan Spirituality Center in Arbor Vitae, Wis. Then, during an affiliation live-in, Bob discovered his connection to two FSPA who had worked with and inspired him in the past: Sisters Julia Anne Maus (in his first ministry job) and Dorothy Sweeney (who encouraged his chaplaincy).

Independently, Bob has engaged professionally in authentic ministry for many years. He holds a master’s in pastoral studies from Minnesota’s The St. Paul Seminary School of Divinity—St. Thomas University in 1990 (along with a bachelor’s in biology from the University of Minnesota Minneapolis, achieved in 1977). He is a board certified chaplain and has served Duluth’s St. Mary’s Medical Center as such since 2008. Prior to that, Bob was a manager of spiritual services and mission integration for six years at Howard Young Medical Center–Ministry Health Care in Woodruff, Wis.; a counselor of Rural Minnesota Concentrated Employment Program in Little Falls, Minn.; a staff chaplain in Aberdeen, S.D.; and a staff member and director of a retreat and education center, also in Little Falls.

Within his Catholic divinity, he is a lector at his parish; sits on various committees for the National Association of Catholic Chaplains; holds a leadership role with North Central Prairie Chaplains; and is a formation director for his fraternity of the Secular Franciscan Order. In charity, Bob’s a volunteer with Damiano Center (an organization that serves the needs of the low-income, unemployed and working poor people) in Duluth. And in his immediate family, he is husband to Jane and father to three adult children. He is engaged in affiliation with his contact, Sister Pauline Wittry.

Bob is fully committed in coalescence to FSPA. He feels his role as an affiliate “fits well with the ideal of ministry partnership that I hold dear, bringing together service to others and the prophetic vision.” And, not only as a partner with FSPA but also a Secular Franciscan, “I would like to support this spirit, this mission and this community,” Bob says, “in any way I can.”

“Why am I an affiliate?” begins Jerome Boge, asking the question that FSPA would like to know as he begins his new covenant affiliation. His answer is this: “I want to further serve Jesus Christ.”

Jerome has already further served—in the ministry of health care as a radiation physicist—his entire professional life. His mission began when he earned a bachelor’s degree in biology from St. Norbert College in De Pere, Wis., in 1963; then he proceeded to achieve a master’s in radiological health from the University of Minnesota in 1966; and he went on to obtain certification as a medical dosimetrist in 1992. With these accomplishments, Jerome advanced through his career serving as a health physicist, then a radiation physicist and, from 1989 to 2012 when he retired, a director of radiation oncology.

He’s also continually volunteering for charitable causes. Jerome is a certified auctioneer who, for 35 years, has used his talent to raise funds to the tune of $2 million dollars for nonprofit organizations. Kids in the Boys & Girls club, clients of the Meals-on-Wheels program, Eucharist recipients/patients at Gundersen Health System and hospice care patients with Mayo Clinic Health System have all received Jerome’s support throughout his many modes of giving.

Jerome approached the process of becoming a FSPA affiliate “as my professional career came to an end.” Having worked with some of the sisters while employed at Gundersen, “I admired their charism and contemplated service with them.” He has the pleasure of personal friendship with several FSPA sisters. Affiliate Vince Hatt is also his friend and his contact. A resident of La Crosse, Jerome has the continual support of his wife Patricia, three children and 10 grandchildren.

And so further fostering the evolutionary spirit of affiliation with FSPA, Jerome will continue to seek, as he says, solid discipleship of Christ. “I believe I’ll continue to increase my faith life and the FSPA,” he knows, “will be a good conduit.”

“I knew she was more than just a religious education instructor,” begins new prayer affiliate Lynn Patricia Burke. She sat in the front row in a classroom in Las Vegas, Nev. She prodded her teacher, gently, for more information about life as a FSPA. “I wanted to be like her in so many ways and believe she was invited into my life for guidance, love and understanding—to live life to the fullest—by the power of God.” Today, she is led in prayer affiliation by that teacher—now her contact—Sister Lorraine Forster.

She, Lynn Patricia, is certified as an administration assistant who put her skills to work as a house coordinator for the substance abuse treatment and prevention organization Phoenix House Foundation in New York. Now, having moved to Las Vegas to care for a family member who suffered a stroke and joined St. Anne Parish, she financially supports Benedict Joseph Labre Ministry to the Homeless (and helping, each Monday, to provide food, water and other essentials); donates food and clothing to many area churches; and volunteers for the bible study group, as needed, at St. Anne. Lynn Patricia also speaks of Sister Thea Bowman Day: it’s one Monday every month, on Charleston Boulevard, for not only supporting the hungry and homeless African-American women there “but also for celebrating multi-cultural faith as well,” she says.

She, Lynn Patricia, is a woman of devotion to family. She is mother to adult son Andrew. She speaks of “my mom, grandmothers and all in my family who are with our dear Lord and watch over me daily as I return to others what I have in me to give a big heart.”

She, Lynn Patricia, says, “I’m a better person, a child of God, and will be whatever he needs me to be to help the missions and the FSPA.”

Barbara Vivero, by profession, was committed to the work of caring for those in great need. She had a career insuring people in crisis as owner and president of ABC Insurance Agency, Inc. Barbara also owned Divine Mercy Book and Gift Store and served as president of both Barjiana, Inc. and Gospa LLC Management Company. Throughout the 1980s, she was a member of the Property and Casualty Advisory Committee to the Nevada Insurance Commissioner.

She is devoted to the Franciscan tradition of caring for those in great need through volunteerism. She gives herself as a caseworker and Disaster Action Team member with the American Red Cross, volunteers with Hospice of Las Vegas and is a temporary protection order assistant for Safe Nest, an organization that harbors people in domestic crisis.

And now, in retirement in her home in Las Vegas, Nev., after much prayer and contemplation, Barbara is united in caring for those in great need as a FSPA prayer affiliate. With the inspiration of affiliate Theresita Caponigri (“Tessie is a member of my church and she invited me to get together with Sister Lorraine Forster”), she did so feeling that “the ideals expressed by St. Francis align completely with the various volunteer works I participate in. My faith and personal life are both enhanced by the collective prayers of all FSPA sisters and affiliates (including her contact, affiliate Bernadette Murray.)” These prayers, she says “act as a conduit for the many people I serve through my volunteer works—with the victims of natural disaster, warfare, domestic violence and those held in hospice.”