Meet two women, Paula Naill and Susan Shimshak, who have recently joined FSPA as members of the affiliation program. 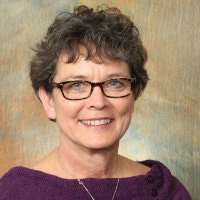 Paula Naill
Finding herself twice divorced with “kids raised … retirement set” and having “always questioned the call to be closer to God and living religious life,” Paula Naill discovered FSPA “by way of the internet, Googling entry requirements for becoming a nun.” She found two things: “I was too old” to join the congregation “at the age of 56” but also, the affiliation program. “And so it was ...”

But “having gone the family route” years ago, Paula first cared for sons Joe and Shawn (who have now given her four grandchildren), worked in many professions and served her community. Earning a Bachelor of Science in business and computer science from the University of Minnesota-Mankato, she became a project management professional and eight-year veteran of the U.S. Army/Army Reserves, going on to work in the insurance industry for 23 years. She is a servant leadership graduate and, in Wisconsin’s Diocese of Superior, a lay leader of prayer, communion minister, member of both the homebound communion and faith formation committees and volunteer for Feed My Starving Children and The Salvation Army. She also speaks of “feeling blessed and honored  … for the ministry of caring for my mother (who passed away) and father.” And she’s grateful for her new family of sorts, the Marywood Companion Group.

The resident of Danbury, Wisconsin, led in affiliation by contact affiliate Marge McCardle, now chooses “to be an affiliate because I am Franciscan by nature and know I’m led along a path; I’m just learning to let it fall into place with a lot of prayer and faith. I have no idea where I’m going but I know from my core this is where I’m supposed to be. I pray and try to listen hard to the Holy Spirit for the intuition and guidance to find the next steps that will surely come my way.”

Susan Shimshak
With four FSPA great aunts in her family, Sisters Rose, Mary Claude and Ceciline (on the Donndelinger side) and Sister Vitalis Smykala (on her father’s), “Franciscan values are already deeply woven” into new affiliate Susan Shimshak’s life. “FSPA played a key role in my upbringing and faith development. As a graduate of Aquinas High School and Viterbo University, I was educated by the sisters and exposed regularly to their dedication and service.”

With her Franciscan ties, a bachelor’s degree in education and a master’s in English, Susan has cultivated a profession of education (teaching kindergarten and elementary students), writing (books for children) and communications (public relations, marketing and, currently, consulting). “I also serve and provide PR, communications and fund development assistance pro bono to nonprofits dedicated to serving young women recovering from trafficking.”

Susan also expresses her Franciscan values as a choir member at Church of the Gesu in Milwaukee, Wisconsin. It’s where she met her now contact Sister Bernadette Prochaska (who sang in that choir, says Susan, “for more than 30 years!”). “We began a conversation about the special place in my heart for FSPA.” She discovered that “in honor of the legacy begun by great aunts and profoundly lived by my mother, I felt called to support the FSPA’s mission and values through affiliation” and social justice, “particularly peacemaking, caring for the poor and marginalized and protecting our natural world.” Many years ago, she was also drawn to adoption. “I adopted a young girl from a Romanian orphanage and raised her as a single parent.” She is now “a proud grandma to Maddie, my three-year-old granddaughter.”

And Susan hopes to carry on FSPA’s most indelible ministry: adoration. “The chapel has always been a sacred space where I’ve found God’s presence alive and palpable.” Having submitted “many prayer requests over the years” she is “grateful for FSPA’s dedication to continual prayer and adoration.”Such a “commitment ... serving others and living simply aligns closely with who I am as a person and who I feel called to be.”