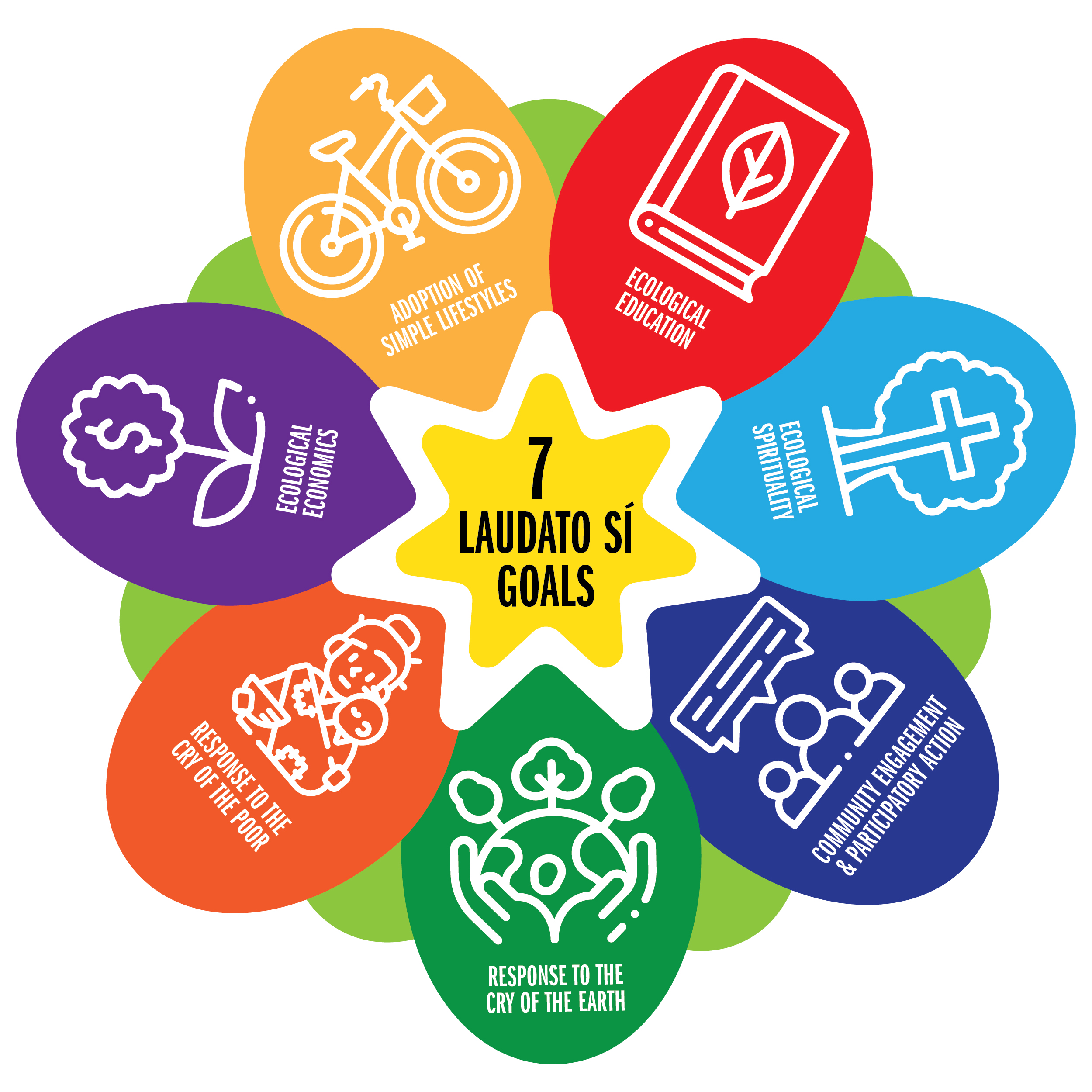 “We have the opportunity to prepare a better tomorrow for all. From God's hands we have received a garden, we cannot leave a desert to our children.” - Pope Francis

Pope Francis released his Laudato Si’ encyclical in 2015, an urgent call to ecological sustainability. And in 2021, he invited all of us to take significant action. Building on our Franciscan legacy of caring for creation, FSPA accepted Pope Francis’ invitation and committed to the seven-year journey for the greater good known as the Laudato Si’ Action Platform.

“We need a new ecological approach that can transform our way of dwelling in the world, our styles of life, our relationship with the resources of the Earth and, in general, our way of looking at humanity and of living life,” Pope Francis said in a video message in May of 2021. And we promise to make our voices heard whenever opportunities arise. 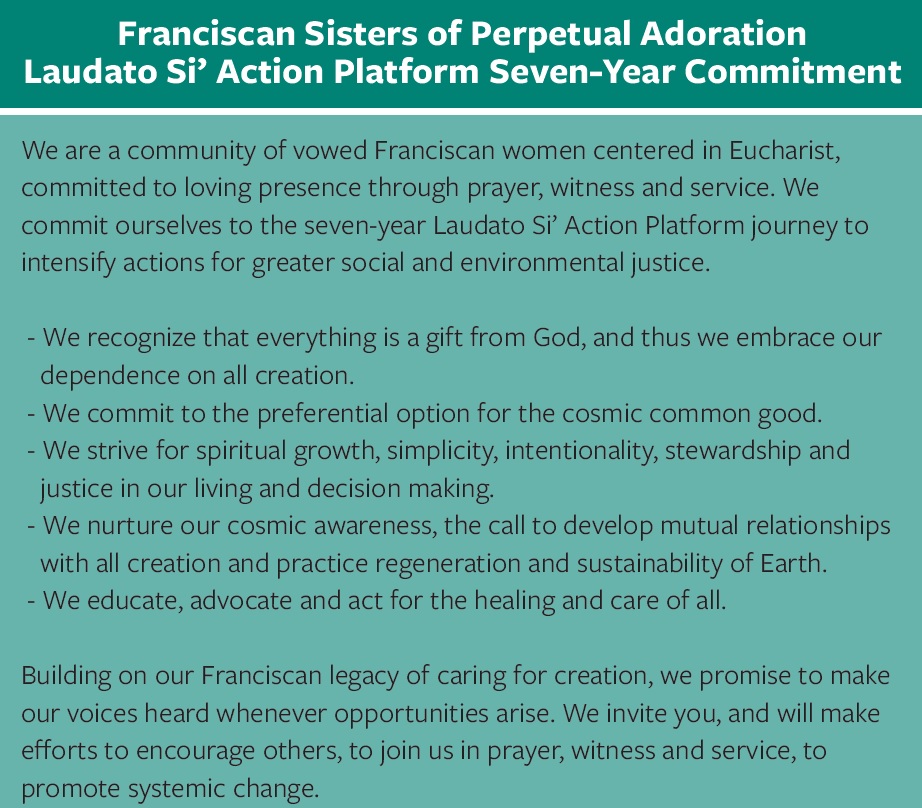 “The goals include a response to Cry of the Earth, response to Cry of the Poor, Ecological Economics, Adoption of Simple Lifestyles, Ecological Education, Ecological Spirituality and an emphasis on Community Engagement and Participatory Action,” explains Beth Piggush, integral ecology director for FSPA who serves as the Laudato Si’ promoter. “Our call is to view our actions through a Laudato Si’ lens and step up efforts to care for creation and promote an environmentally sustainable lifestyle.”

The Leadership Conference of Women Religious Global Concerns Committee released a Resolution to Action, authored by Sister Lucy Slinger. In "Deep Dive into the Intersectionality of Racism, Forced Migration, and Climate Crisis: Head, Heart & Soul Knowing," Sister Lucy calls for the effort to dive into the issues in new ways. She says, "Doing the deep murky dive to discover your personal enculturated ways of denying DNA instinctual behaviors is needed for the quantum leap to bridge racism, forced migration, and the climate crisis."

Pope Francis has invited and challenged us to join the solidarity economy, the Economy of Francesco, a worldwide movement aimed to change the current economic models and craft a future that is more inclusive and just. Learn more about Franciscan Economics and corporate responsibility. 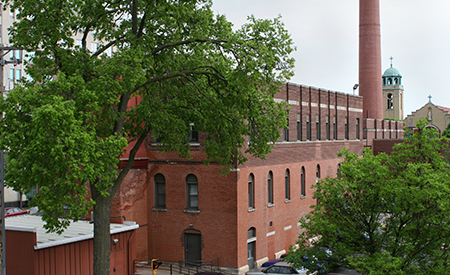 Generally, as high pressure steam is distributed to each facility, the steam pressure is decreased with a mechanical pressure reducing valve. By reducing the high pressure steam at the district heating plant through the steam-driven turbine generators, electricity is produced and low pressure steam is generated to heat the buildings. This process is called Combined Heat and Power (CHP). The two small steam-driven turbine generators can run 24 hours a day and produce about 40 percent of the average annual electricity used by FSPA. The goals for installing this technology go beyond actual cost savings and emission reduction. Steam plant tours demonstrate district heat and CHP to groups of professionals, building operators and the general public, encouraging others to utilize combined heat and power in their facilities. 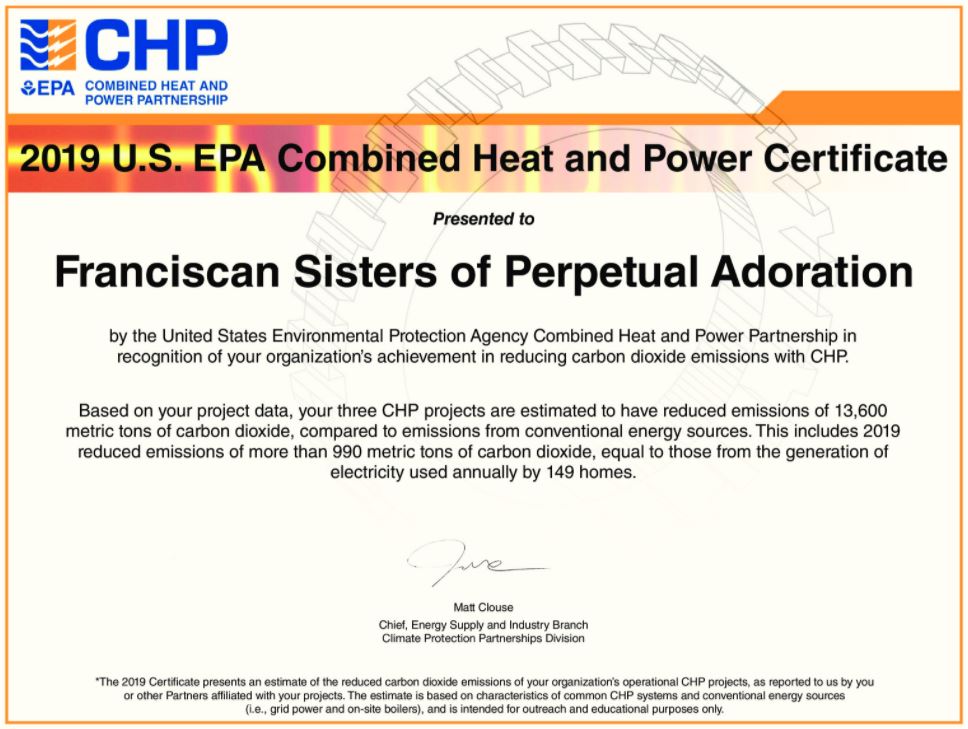 "On behalf of the U.S. Environmental Protection Agency’s Combined Heat and Power Partnership, I am pleased to provide you with your organization’s 2019 CHP Partner Certificate," writes Matt Clouse of the U.S. Environmental Protection Agency.  "The certificate documents the estimated 2019 carbon dioxide reductions, expressed in metric tons, attributed to your CHP projects and the equivalent emissions from the generation of electricity used by U.S. homes. This estimate is calculated by comparing the emissions associated with each CHP system's output to the combined emissions from equivalent amounts of conventional energy sources (i.e., grid electricity and on-site thermal generation)."

FSPA also uses a computerized energy management system that operates air handlers and chillers for cooling St. Rose. Peak electrical demand is monitored and the steam plant operator has the ability to change various equipment schedules while maintaining a reasonable building comfort level. Lower building temperatures during the heating season, humidity control during the cooling season and the ability to remotely regulate unoccupied lighting and ventilation levels on a day to day basis all contribute to energy use reduction.