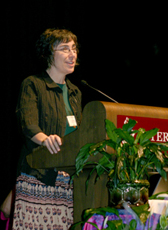 In preparation for the peace conference, the four congregations gathered July 31 to convene the next phase of the Cultural Audit work each congregation has spent two years conducting.

“Culture is a part of all of us and everything we live and breathe,” said Marcia Lunz, OSF, during her introduction. “We can describe it in many ways; hot, cold, damp, polluted and so on. But no one can grab a handful of air and describe what they have just caught. In all the work we have done in our congregations we have tried, in the words of jargon, to get a handle on it—the ‘it’ being culture.” Sister Marcia noted that the family table drawings were a very good example of the congregations work. “When we worked with the Tavolos,” said Sister Marcia, “we were articulating the values that describe our congregation’s cultures, or when we viewed films that centered on another culture that was another approach on getting a handle on what it meant by culture. We all have ethnic backgrounds; we for the most part live in a culture shaped by many ethnic backgrounds.”

In describing the work of the Cultural Audit, Sister Marcia said, “Regardless of our cultural experiences and understanding, today is a new moment. Today we are going to consider together, four congregations represented. Hopefully this will broaden our horizons in our learning and bond us together even more deeply. We invite you to enter into today’s program with open hands and an open heart and ask God for the grace to be comfortable in your own being and with whomever you are with.” 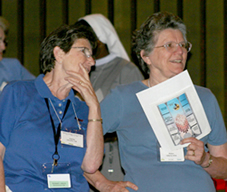 Eileen McKenzie, FSPA, reviewed the work that has been done in the last two years using the iceberg analogy. “When we look at the iceberg as analogy for culture, we look at the top part above the water and we see that is representative of our external culture—that which we are aware of. When we look at the level below water, that is more of our internal culture—that which is invisible.” According to Sister Eileen, “When we talk of external culture—or the level above the water, our awareness—we’re talking about our senses: what we can see, hear, taste, smell. We’re also talking about those acknowledged attitudes and conscious thoughts that direct our beliefs.” She went on to say that there can be quite a bit of work involved when we interact with different cultures and she used the example of speaking a different language when necessary. “Once we spend a little time in a different culture thinking we know what we’re doing, there’s just a lot of confusion,” said Sister Eileen. “That’s because most culture is below our level of consciousness—what we’re aware of. Eighty percent or so is what we’re unaware of.” She said that our internal culture consists of our unconscious beliefs and thought patterns. “This is based on how we were raised and what our family values were. It’s important for us to remember, as Sister Marcia said, culture is like the air that we breathe, we’re not aware of it until we’re out of it.”

Before introducing representatives from each congregation to present their Tavolas, Sister Eileen said, “We are learning from each other, adapting our understanding so we can work together. We have finished the first tier of our cultural audit work and this is the second tier.” The four congregations then shared their work—artistic expressions in the form of Tavolas. After the presentation, an attendee shared about the Tavolas, “The artistic expression says more than the words.” 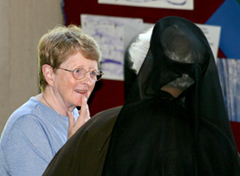 Following the presentation of Tavolas, keynote speaker Tom Thibodeau addressed the communities. Tom, associate professor of religious studies at Viterbo University, set a context for U.S. cultural values saying it’s all about relationships. He said “It is our challenge today to continue to be in dialogue with people from cultures different from our own, to embrace evangelization, economical dialogue, emerging spiritualities, political and social movements.” About the common founding of the communities present, Tom stated, “The founders of your order were women of prayer, courage, intelligence and action who read the signs of the time by paying attention to the lives of the people they served. The signs of the times are written in the lives of the people we serve.” Tom said he sees the following as the sign of today’s times; “There’s needs for healing, contemplation, friendships—belonging and community. You have been practicing these for a long, long time. They are who you are.” He said he saw the Cultural Audit as a hopeful event, “We need to stand together and, like today, continue to bring people from different parts of the country together.”

Following Tom’s presentation, groups discussed cultural expressions in U.S. and Cameroonian culture and were asked to write parables in order to “awaken us to how we live the Gospel according to our cultural values.” The Cultural Audit concluded with a sharing of the parables. In her closing remarks, Sister Eileen invited the group to sit with the information and let it settle in. “Pay attention to what you’ve heard throughout the day that has spoken loudly to you, get in touch with that as well.”

The committee is planning the next phase, or tier three, of the Cultural Audit. This tier will bring together the work of the four congregations and include their partners in ministry, FSPA affiliates, OSF associates and FSE apprentices.