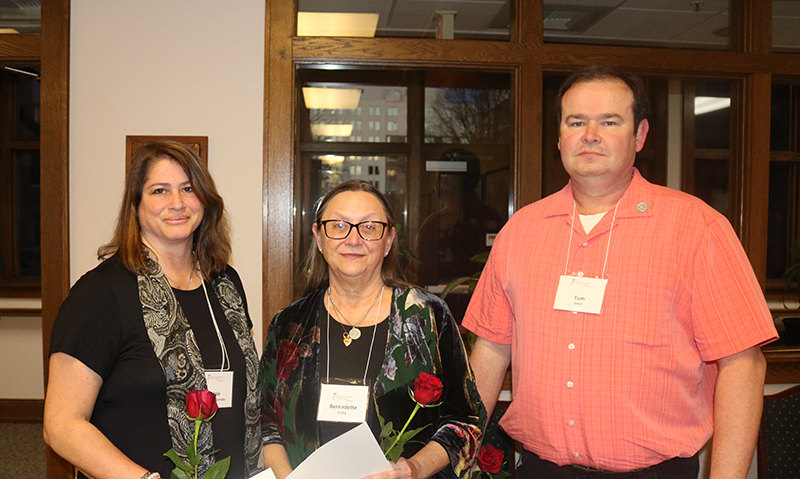 “My choice to be an affiliate came from wanting to be part of a living, non-judgmental praising community,” explains Berni, who currently lives in Argyle, Wisconsin, with her husband, Brad. They have a blended family which includes two grown children, one daughter who passed away and several grandchildren. Berni also takes care of her developmentally-challenged sister Evie, a responsibility she is grateful for. “I learn so much about love from her and am blessed to be her legal guardian.”

Berni holds degrees in social welfare and social work. When she wasn’t caring for her family, she served as a printing/design artist, a hospital medical social worker and a hospice social worker. Now retired, she continues to volunteer for hospice care, and assist at funerals and luncheons, through the American Legion Auxiliary and with Mental Health Matters of Lafayette County.

Tom Smith
It was Tom Smith’s interest in architecture that initially drew him closer to FSPA. “I like old buildings and old arches, especially churches. And I always thought it would be so cool to go to Mass there,” he says of Mary of the Angels Chapel in La Crosse, Wisconsin. When he did, he picked up a pamphlet on becoming a prayer partner, and he answered the call. To him, FSPA affiliation seemed like a natural progression of his connection with the community.

Professionally, Tom served in the U.S. Army and with the Chicago Transit Authority as a maintenance supervisor. He now works with BNSF Railway as a locomotive engineer, on call around the clock, and as a union leader. In his free time, he is involved with Knights of Columbus, and he enjoys studying Great Lakes maritime history, which includes volunteer work with a museum in Duluth, Minnesota. “When I’m home, I try to devote all of my time to my family,” Tom says. That includes his wife, Elaine, and a combined family of nine children and seven grandchildren.

Tom says being an FSPA affiliate has enriched his life. “It has made me a better person.”

Adele DiNatale-Svetnicka
Adele DiNatale-Svetnicka came to know FSPA through sisters Jolynn Brehm and Marla Lang and the programs at Marywood Franciscan Spirituality Center. And it was during her studies at Viterbo University in La Crosse that Adele first experienced Mary of the Angels Chapel and the Adoration Chapel. “Words cannot describe the feelings, wonder and awe I experienced in that hour.” She knew right then that she wanted to deepen her connection with FSPA.

Adele and her husband, Glenn, have three children, the youngest of which is ready to attend college in the fall. They live in Eagle River, Wisconsin.

In addition to earning her undergraduate degree at UW-Madison and a masters in servant leadership from Viterbo, Adele has been a stay-at-home mom and volunteer, most notably as the Mothers of PreSchoolers Steering Committee coordinator in several different states over many years. Today she is coordinator of faith formation at St. Peter the Fisherman, a role borne out of years of dedication as a catechist. Adele has been recognized for her dedication with the Father Harold Dodge Award for Excellence in the Ministry of Catechetics.