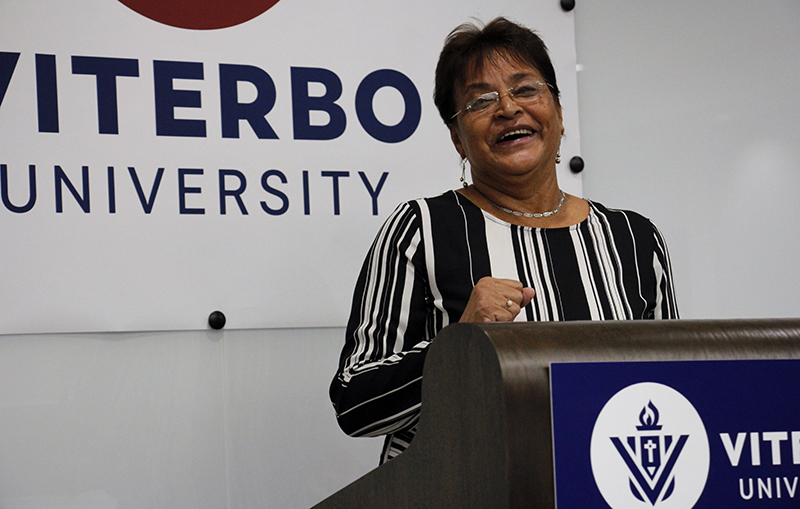 Ana’s journey to the Viterbo stage in La Crosse, Wisconsin, is one that began on the precipice of the civil war in Santa Ana, El Salvador, in 1973, when Sister Cecilia Corcoran and Maryknoll priest Maurice Healy offered her a scholarship to the university. “I did not hesitate to answer. Higher education for me was a dream and an aspiration; I would leave El Salvador and go anywhere to continue my studies.” And so Ana boarded a plane and landed in La Crosse. She felt she’d freeze in the snow but was warmed to her core by the embrace of the Franciscan Sisters of Perpetual Adoration community.

Ana went on to graduate in 1977 with a bachelor’s degree in sociology and a minor in psychology and became a champion for women, rural communities, human rights and climate change in Central America and beyond. In her own words, Ana shares more of her story and the conviction that “education is the key” for women to escape poverty and achieve empowerment. 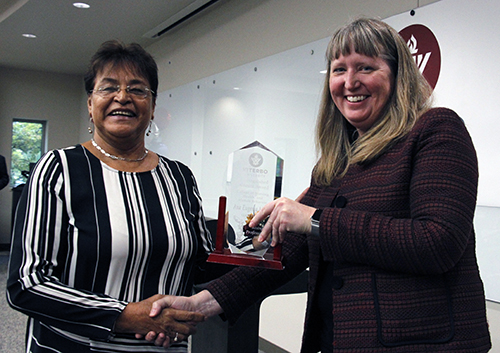 At first, I had no idea what classes at a college in the United States would be like. My English needed improvement. Everything was new to me. During one of my first classes, introduction to psychology, the teacher, Sister Laurian Pieterek, lit candles and asked us to think silently about the people around us, loved ones, nature, ourselves, our feelings and the importance of the group. It was beautiful, and it reaffirmed the very deep feelings of support, solidarity and joy that I found at Viterbo. Sister Laurian inspired me to take that joy with me. When you enjoy life, you can influence others, which is important for women who have no opportunities.

I kept in my mind the desire to go back to El Salvador as soon as possible. During the summer after my sophomore year I did and found myself in a very painful situation: several of my friends had disappeared, some had died, and others were hiding for fear of repression. I wondered if I should stay in my country and join the social movement of young people. Sister Cecilia helped me to decide to return to Viterbo so that I could have a professional life of building justice and peace.

In 1977, immediately after graduating from Viterbo, I returned to my country. Since then, I have worked with various national and international NGOs focused on defending and empowering the marginalized: coordinating programs to assist internal displaced persons and support community development projects for Catholic Relief Services in El Salvador, co-directing an organization that provides project counseling services for Latin American refugees, and leading Oxfam projects and programs involving women, rural communities and policy campaigns regarding human rights, climate change and development issues in Central America.

Today more than ever, this is the key to empowering women not to be the spoils of war and armed conflicts around the world; to embolden them to end racism and forced displacement. One finds much pain and sorrow but also joy and hope. I have contributed in a small way to the great changes that we need for the world to be more supportive and equitable so that we eradicate the evils of past decades that are still present today.

There are several FSPA who know my country. Their prayers and missions have contributed to our development. Some of the sisters I met in La Crosse or in El Salvador are no longer with us. To all, a big hug from a distance. “Con todo honor,” I share this recognition with FSPA.

As our Monsignor Oscar Romero reminds us, let us continue to be the voice of those voiceless. Let us redouble our efforts for the struggle for justice and the building of peace wherever we are.