Affiliates co-host celebration honoring the success of spirituality in recovery

by Lisa Becker, affiliate
Awareness Day was held in June at the Community Center in St. Germain, Wisconsin. And, in a word, it was awesome. Not awesome in the way you think of a caffé mocha but awesome as in the wonders of God—which often start with the words, “I wonder.”

Last winter, at Marywood Franciscan Spirituality Center in Arbor Vitae, Wisconsin, a group gathered and asked just that; “I wonder?” And what they were wondering about was the program Marywood had offered for years on spirituality and recovery. Could the program be better? Reach more people? Offer a greater understanding of addiction? Then, Barb Grzywacz, FSPA affiliate, birthed an idea. Barb’s prison ministry service and involvement in recovery programs led her to bring the idea of an awareness day event. She shared her idea with Marywood director, Grand Rapids Dominican Sister Elizabeth Amman. And the planning meetings commenced. 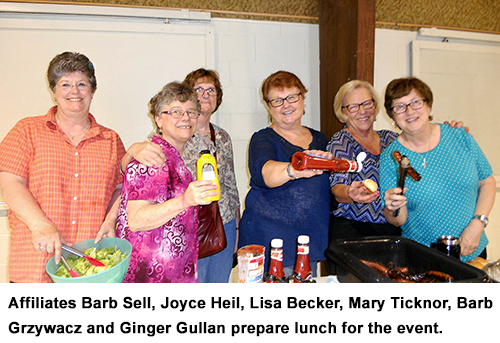 A coordinating group developed what they officially titled Awareness Day – The Ripple Effects of Addiction. The event offered speakers from area recovery programs, musical entertainment, food and sharing. Sister Elizabeth introduced Marywood Franciscan Spirituality Center to the audience and invited all to consider a retreat or to use the facility to spend quiet time alone. She further explained that “everyone has a need to get in touch with his or her inner self, to get in touch with God, to heal, to mend broken relationships and begin again. Spirituality can make us whole. And wholeness is the mission of Marywood.”

Throughout the day speakers shared heartache and joy. The food was great, thanks to affiliates Barb Sell, Joyce Heil, Mary Ticknor and Ginger Gullan. The music was loud and flavored with rock, but people loved it and it brought healing tears to both those with addiction problems as well as those affected by addiction.

One speaker, a young man with a wife and two-year-old daughter in the audience, talked about the ripple effects of addiction. Specifically, he discussed the effects drinking has on family, on career and on finances. So many negative ripple effects were shared, but throughout the day they were countered by the positive effects such as the Twelve Steps program and people helping people.

Another event organizer was Jay Wentworth from Empowered Affiliates, a recovering community organization. Jay has a passion for helping people. He said that over 100 people a day die from a drug overdose and there is a “nationwide resurgence for recovery advocacy.” He added, “We have to take this stuff out into the light and break the secrets.” His personal hope for the day was for people who are still drinking to realize it is never too late for change.

I sat by a woman named Susie for much of the day. Susie, 64, told me she had been an addict for 40 years. I asked her why she came. She said “to see how others are doing; a place like this, well, there’s no shame. You need to keep attending programs to keep going.” Susie shared she has been clean for nine years. She had been in prison at one point and told me the only book you can take into prison is the Bible. She said she had disrespected God but when she was finally able to go to a prison chapel, well, things changed. And she never looked back. She told me “you just need to feel it.”

There was a lot said—and felt—that day. It’s difficult to explain, but something spiritual happened. Three themes emerged: a relationship with God, hope and no shame. I learned a lot as an affiliate and am grateful to Barb for this idea, to the sisters at Marywood, Sisters Elizabeth, Marla Lang and Anita Beskar, and to Jay and his group for making this a successful—and
awesome—event.