If you call Lueretha Tillman on Tuesday morning you’ll have to leave a message. She’s ministering Communion to homebound people in her parish.

If you call Lueretha on Tuesday afternoon she won’t answer her phone. She’s shelving and distributing goods at her local food bank. 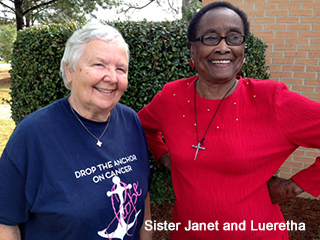 If you call Lueretha on Wednesday morning her phone will be silenced. She’s attending Mass at her church.

If you call Lueretha on a Sunday morning you won’t reach her. She’s serving as a lector there—St. Christopher.

And if you call Lueretha, she actually answers her phone and you question why she’s been so busy, she’ll laugh. “People ask me that all the time.” The 79-year-old volunteers simply “because I enjoy it.”

“I’ve been blessed to do it,” exclaims Lueretha, “by the Savior!”

It’s those she’s cared for throughout her life, though, that are privileged. Lueretha was a nurse for 26 years; working mostly at nursing homes in Claxton, Georgia. Fresh out of school, she recalls, she wanted to find a job in a hospital. But when elder care became her first professional opportunity “I thought ‘Oh my goodness.’ And then I fell in love with it.” She even declined hospital job offerings that came later because “Lord, nursing homes. They’re so much a part of me!” To earn the trust and respect of those elderly folks’ matter-of-factness, Lueretha says, is key. “They need to know what you do and for you to do what you say.

“If by God’s grace you have that gift,” shares Lueretha, “it’s a wonderful blessing!”

Lueretha is the mother of three sons. The eldest, David Jr., having watched his momma care so greatly for her patients, ministers in nursing homes as a chaplain. “The Lord speaks to him. He’s good at it.” Dwayne, her middle child, is studying to be a deacon and serves people with autism and other disabilities with the organization Easter Seals. “He loves them and they love him.” Walter, the youngest, is a juvenile justice counselor who works with kids and families in his school district. “He is so blessed, and they are blessed to have him.”

“I’m proud and thank the Lord for their gifts,” declares Lueretha. “God has blessed us every step of the way!”

Lueretha became an FSPA prayer affiliate in 1997 “because of Sister Janet.” Sister Janet is Janet Fischer, FSPA, “who’s been reaching out to the community for 30 some years.” They share a love of volunteerism, and for each other. “I told her she’s not just Sister Janet, ‘You’re my sister sister.’” In hindsight that relationship just may have been foreseen as Lueretha joined the Catholic Church in 1964—the same year Sister Janet professed final vows. As a young adult, Lueretha herself discerned religious sisterhood. “I could have had that life, but then I wouldn’t have my sons.

“On either side,” affirms Lueretha, “I’ve been blessed!”

When (as she has for the past 15 years) she serves Communion to those homebound Lueretha says she’s “bringing Jesus to them.” And through what she considers to be her phone ministry they don’t just see her once a week but can call her any time. If someone is having trouble understanding something “I go to them and explain. I do that and I like that but I can get too busy too. I pray about it, but I’ve always said I want to do whatever I can do.” Reading about the ministries of FSPA and other affiliates inspires her too.

“It’s all a blessing,” reveals Lueretha, “that keeps me going!”

For whatever reason she’s answering her phone, whomever she’s speaking with, whichever ministry she’s engaging in, Lueretha avows “It’s nothing but pure joy. No one handed me these jobs. I chose to do what I’m doing.”

“It’s all nothing,” proclaims Lueretha, “but blessing to me!”