Thomas Abts *
Thomas attends Roncalli-Newman Parish, La Crosse, Wisconsin. He is a Lions Club member and is a church greeter. He has two children and six grandchildren.

Kristen Adams
Kristen is a sophomore nursing major at Viterbo University in La Crosse. She is involved on campus in clubs, choir and volunteering. Her areas of interest in nursing include public health, mental health, forensic nursing and critical care.

Julia Baier
Julia is a senior at Viterbo University, where she studies English, art and religious studies. She is part of a large Catholic family, and her home parish is Nativity of the Blessed Virgin Mary in Bloomington, Minnesota. She is accompanied at all times, including adoration, by her service dog, Quincy.

Rika Beckley
Rika is the development director at the Franciscan Spirituality Center in La Crosse. She has two grown children and moved to the area to be near family and surrounded by God’s natural beauty.

Nicholas Berry
Nicholas attends Mass at Mary of the Angels Chapel in La Crosse. His wife, Janice, is also a prayer partner.

Lori Campbell*
Laurie attends First Free Church in Onalaska, Wisconsin, where she helps with the food pantry and the prayer table.

Regina Chihak*
Regina taught music at Aquinas Catholic Schools in La Crosse. She now works at Mayo Clinic Health System-Franciscan Healthcare in Integrative Therapies, and at Leithold Music. She and her husband Chuck have three children. She also helps out with music ministry at Mary, Mother of the Church by playing flute.

Laurie Finn
Laurie attends St. Elizabeth Ann Seton Parish, Holmen, Wisconsin, where she works in the mentor program and other church ministries. She is the owner of Finnotte’s in La Crosse, and is devoted to faith, family, friends, love and kids. She is looking forward to deepening her prayer and faith life through adoration.

Julia Grygleski
Julia is a sophomore nursing student at Viterbo University. Her home parish is Saint Bronislava in Plover, Wisconsin. She has been praying periodically in the Adoration Chapel for more than a year, and when she learned that FSPA was in need of prayer partners, she jumped at the opportunity.

Taylor Hackel
In La Crosse, Taylor attends both St. Joseph the Workman Cathedral and Roncalli-Newman Parish. She is a chemistry/research intern and is part of the University of Wisconsin-La Crosse Food Recovery Network and The Salvation Army Food Service.

Jamie Hammond*
Jamie attends a Catholic church in the Galesville, Wisconsin-area, and teaches in the business and analyst program at Western Technical College in La Crosse.

Kay Kienetz
Kay is married with two children and a daughter-in-law. She works on call as a recreational therapist at Gundersen Health System, La Crosse, and is in the first year of the Spiritual Direction Preparation Program. She is honored to have the opportunity to become a prayer partner.

Tia Meyer
Tia has three grown children and serves as an operations administrator in the Diagnostic, Emergency and Hospital Medicine Division at Mayo Clinic Health System-Franciscan Healthcare. She is a licensed nursing home administrator and teaches Legal Aspects of Healthcare Administration at Concordia University in St. Paul, Minnesota. She also holds prayerful adoration at Church of the Resurrection in Rochester, Minnesota.

Neil Newman
Neil felt the calling to become a prayer partner after attending weekly adoration hours with his wife Heather (Coleman) Newman, who became a prayer partner in 2017. They are the parents of a blended family of children they raise together on the north side of La Crosse. Both Neil and Heather love to volunteer and serve others. To help cure loneliness in the community, they host family-style meals on Sundays to anyone who wants to come.

Nicole Novak
Nicole attends St. Joseph the Workman Cathedral and is a program assistant of the music department and dance staff.  She has been married for almost 10 years and has the most amazing cat named Ailey.

Jim and Cindy Prindle*
Jim and Cindy belong to St. Leo the Great Parish in West Salem, Wisconsin. They married in 1985 at St. Joseph the Workman Cathedral in La Crosse and raised two children together. Jim is the public works manager for the City of Onalaska and Cindy is an IT instructor at Western Technical College. Cindy serves as a eucharistic minister and on the parish council, while Jim participates as an usher in their home parish. Cindy also enjoys visiting nursing homes with her therapy dogs. Prayer is an important priority in their lives and they are grateful for the opportunity to participate as prayer partners.

Larry Skendzel*
Larry attends Viterbo University’s San Damiano Parish. He is a hospice physician and medical director at Gundersen Health System. He is a graduate of the University of Notre Dame and he and his wife and three children recently moved to La Crosse from Marquette, Michigan.

Steve Tanke
Steve is the owner of Mid-City Steel in La Crosse. He and his wife, Suzanne, have three adult children and three grandchildren.

Melissa Wells*
Melissa works at Viterbo University in advancement and alumni relations. She has two children who both work at St. Rose Convent in food service. 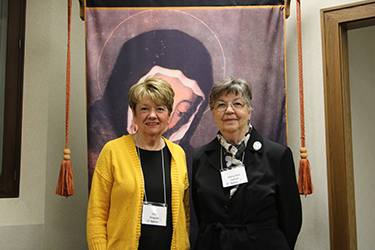